Beneath the Hard Hat

Since a young age, Miles has been an outdoorsman and general handyman, learning from his dad how to build around home. His dad also taught him a valuable lesson in learning how to fix anything that he broke. During Miles’s freshman year of high school, he met Justin Smith and Steve Schmitz through his mom who worked for Gehl Company. “I saw them on the jobsite and thought, ‘Why am I not working with them?’” This first taste of C.D. Smith left a lasting impression that was always in the back of his mind.

Miles loved being active and working with his hands, which led him to UW-Whitewater where he played baseball and studied business. After a decision to stop playing baseball, Miles transferred to UW-Milwaukee to major in Civil Engineering and pursue his love for building things. In May of 2017, he graduated with a bachelor’s degree in Environmental Sciences. Upon graduation, Miles began working for Zuern Building Products where he found an interest in lumber and geotechnical testing and the realization that he wanted to continue building a career in the construction industry. His role at Zuern brought him on jobsites where he learned even more about construction. Here, Miles met his first C.D. Smith Superintendent, Tom Pitzen, while at the Germantown School District project. This reconnection to C.D. Smith left Miles with a similar feeling as the first, sparking his desire to be part of C.D. Smith someday.

In September of 2017, that dream became reality as Miles could officially change his resume to read Project Engineer, C.D. Smith Construction. As a young project engineer in the office, he worked closely with Paul Smedberg and Cory Henschel, who gave him guidance and pushed him to grow as a professional. After just a few months with C.D. Smith, Miles was given an opportunity to test his skills. He recalls, “Paul walked up to my desk and asked, ‘Do you want to go to Portland?’” A bit stunned by his question, Miles replied, “Let’s do it.” Cornell Road Assisted Living Facility, located in Portland, Oregon needed someone onsite to help keep the project moving forward by monitoring the schedule and facilitating clear communication between the owner, subcontractors and C.D. Smith. Two weeks after that first conversation, he packed up his things, said goodbye to his family and long-time girlfriend, and called Portland his new home. “It was like getting thrown into a fire, and having to slowly put it out,” said Miles.

“If I wouldn’t have gone to Portland, I wouldn’t be where I am today. As a rookie at the time, it taught me so much,” said Miles. His role required him to develop his coordination and project management skills, keeping subcontractors honest and on schedule. “Those skills would’ve developed a lot slower had I stayed in the office instead of going out West,” he remarked. “That was the biggest lesson for me in my career. I needed to document everything in detail. Now, I feel extremely prepared for any project that comes my way.”

Miles credits Paul for giving him the opportunity, appreciating the confidence Paul had in him to move across the country, adapting to the new situation in order to deliver a superior space for the client and its residents. For nine months, Miles worked on the project in Portland, building relationships with foremen and laborers. He recalls fun times spent with them off the jobsite as they went hiking in the mountains and even went to Washington State football games in the fall. Of course, leaving home, family and a long-time girlfriend was a challenge. “My girlfriend was supportive of me chasing my dreams, and came to visit almost every month,” he said, “but towards the end, I could tell she was ready for me to be back home.”

Most recently, Miles worked as Assistant Project Manager on the Fond du Lac County Highway Garage. “One of my favorite parts of construction is getting to see heavy machinery go to work,” remarked Miles. Working closely with Kevin “Kooch” Schroeder, he said this project was his favorite simply because of how well-coordinated it was. With few change orders and a fast pace, the project was delivered ahead of schedule, allowing Fond du Lac County to utilize the new facility to more efficiently serve the County’s residents.

When asked who has had the most significant impact on his career, Miles didn’t hesitate. “The Project Executives, Paul Smedberg and Cory Henschel, and Superintendents, Kevin Schroeder and Mark Roehrig, who I’ve worked so closely with, have been the biggest influences on my career,” he replied. Between these four men, there is nearly a century of experience within not only construction, but at C.D. Smith. “They’re all so knowledgeable and have been with C.D. Smith so long. I want to speak their language; they drive me to be better,” Miles commented. As a young professional in the industry, having role models like these men is a catalyst for professional growth and development. He also gives credit to his dad, “The Tool Man Heidecker,” named comically after Tim “The Tool Man” Taylor from the 90’s popular sitcom icon Tim Allen in Home Improvement.

“My dad knew nearly every tool in construction, working for a general contractor for over 30 years,” Miles said. Like many young kids, he spent a lot of time with his dad, learning how to build things, break them down and build them again. These memories have helped him in his adult life as he continues to build things and occasionally, break things while working to renovate his house.

When asked about his favorite memory or story from his time at C.D. Smith, Miles laughed and said, “That entire first year.” After returning from his time in Portland, Miles bought a house and got engaged soon after. “It’s just a fun story to tell someone because it shows how fast things change in a year,” he says. “Don’t be afraid to put yourself in an uncomfortable situation, challenge yourself, ask questions, have humility, and don’t become comfortable; keep moving,” he says, wishing he could go back and tell himself this advice on his first day at C.D. Smith. The feeling of being comfortable in a position may tell us that we need to be challenged, as many times those uncomfortable and challenging moments are the times where the most growth occurs. Miles is a perfect example of someone who was placed in a new and uncomfortable situation, but feels he is a better person and project manager because of it.

Outside of work, in addition to modernizing his fixer-upper home outside of West Bend and tackling “honey-do lists”, Miles enjoys outdoor activities; deer hunting in the fall, walleye fishing in spring and summer, perch fishing on the hard water and the occasional Busch Light or Corona with the guys.

As a young project manager, Miles is eager to build his career with C.D. Smith for years to come. With a “get it done” mentality, willingness to try new things and adapt to changing situations, Miles is a direct reflection of his mentors. We congratulate Miles on an exciting start with us and are excited to see what he can accomplish in his career and future at C.D. Smith! 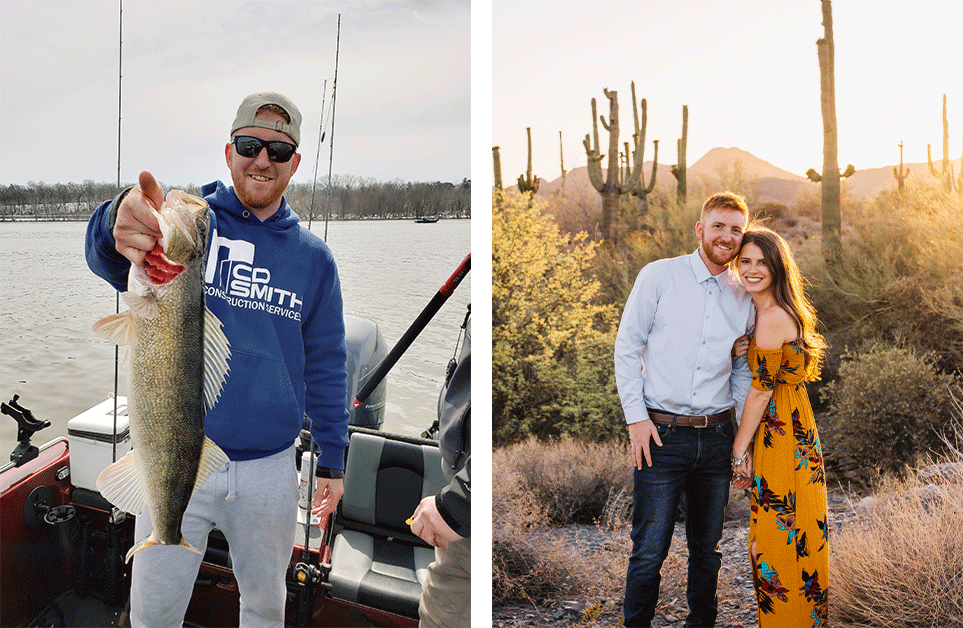 Ready to build community and get connected with commercial construction expertise? Use the below form to submit questions or request information. We look forward to learning more and discovering how we can make YOUR PROJECT. OUR PRIORITY.®.