Beneath the Hard Hat

Thank You, Veterans, for Serving Our Country!

Veterans Day honors all of those who have served our country in war and peace. At C.D. Smith, we are privileged to have many remarkable veterans work in our office, yard and field. One of which is Terry Owens, Vice President of Field Operations.

Terry served eight years in the United States Army. Upon joining as an E1 Private in June of 1986, Terry spent time stateside at Fort Leonard Wood for Basic Training and Advanced Individual Training. After training, his permanent base became Fort Knox. He also had additional tours at Fort Bliss and Fort Irwin. In April of 1988, Terry exited active duty and joined the United States Army Reserves. During this time, he was stationed in Manitowoc, WI. His troop was activated for Desert Storm in 1991, which caused him to spend four months at Fort Sill. Terry exited the United States Army Reserves in 1994 as an E6 Staff Sargent.

When asked why he joined the military, Terry said, "When I was in high school, I was trying to figure out how to pay for college. I joined at first for the Army college fund. Just four days after high school graduation, I was at Fort Leonard Wood in Missouri for Basic Training." After exiting the Army, Terry spent one semester at University of Wisconsin-Stevens Point before realizing that he wanted to work in the construction industry. The following summer, Terry took an apprenticeship and the rest is history.

Terry has been with C.D. Smith since July of 1996 in such roles as Carpenter, Superintendent and most recently as a Director of Field Operations. Terry credits his military training for many of his leadership qualities to date. "I had to grow up very quickly. The military offers structure to help develop young men into directed young men. I was held accountable for my actions," Terry shared. While in the military, Terry took many leadership courses, many of which still guide him in his current leadership role today. Terry shared that he is no longer responsible just for himself but for his team also.

Terry's discipline can be seen through his actions. His military training has directly impacted his leadership style. He focuses on his whole team and is results driven. 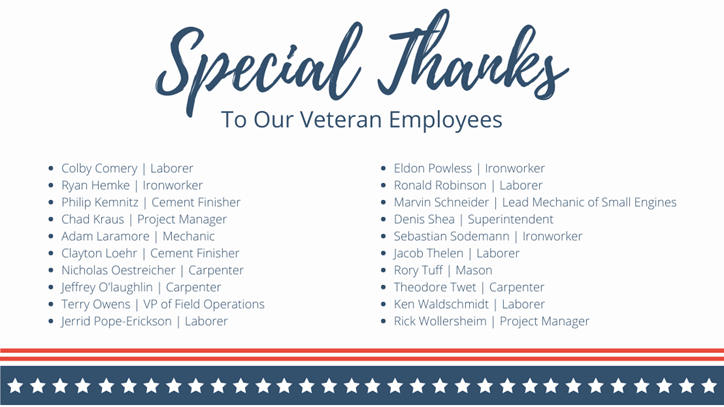