Before Photo of Warner Grand Theatre Balcony View of Stage

The Warner Grand Theatre was once an opulent movie palace. The Great Depression meant difficult times for 1930s' Milwaukee, and this affordable but luxurious space was a place where people could escape from their daily lives. The Warner Grand Theatre was originally designed according to an architectural vision of providing what most ordinary Milwaukee citizens in the 1930's would think of as fancy.

At one point, the theater's vertical space had been split in half to create an upstairs theater and a downstairs theater. The divider that formed the ceiling of the downstairs and floor of the upstairs ran from the front of the balcony to the proscenium's vertical plane at the front of the stage. When that was removed in preparation for Milwaukee Symphony Orchestra to initiate acoustical tests on the space, it left a disturbing horizontal blemish at the removal site on the walls all the way around the theater.

The blemish might have been made more noticeable by the lack of nicotine stains where the ceiling/floor had once been. The majority of the historic restoration and preservation work performed by Conrad Schmitt Studios was the careful removal of nicotine buildup from decades of movie palace patrons smoking cigarettes, cigars and pipes in the theater. Every surface was carefully cleaned and restored using small conservator tools (toothbrushes and precision tip cotton swabs) to ensure they didn't remove the original paint. The interior spaces are brighter because all surfaces have been cleaned and restored to their original, authentic paint colors. 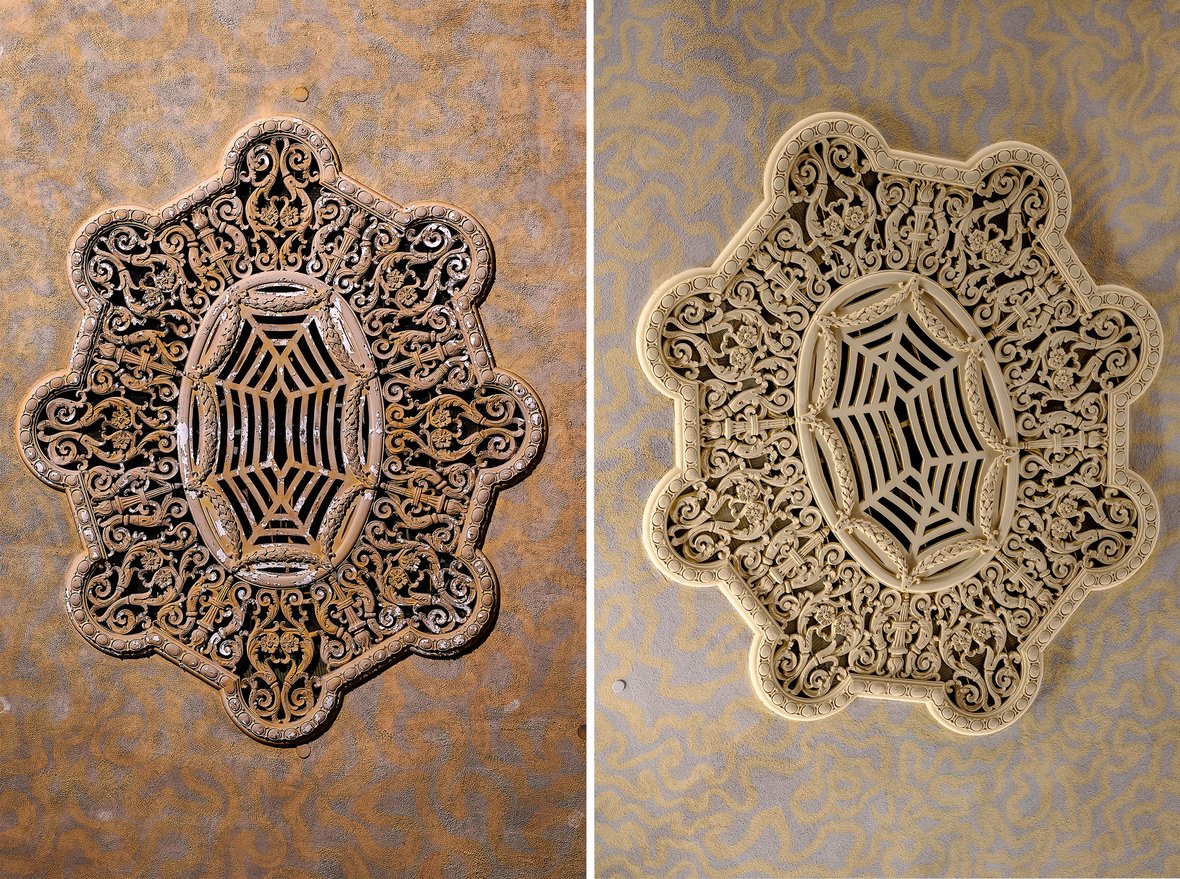 Before the Milwaukee Symphony Orchestra's purchase and renovation of the Warner Grand, the theater had been devoid of any activity since its closing in 1995. During that time, Marcus Theatres still had the land lease for the building and kept it warm, clean and secure. Even though the building was aged, worn and seemingly abandoned, the original light fixtures, door handles and small decorative items remained true to the original space. It's hard to imagine the newly renovated Bradley Symphony Center theater sat for so long when you walk into a space filled with so much craftsmanship and artistry - down to every last detail. 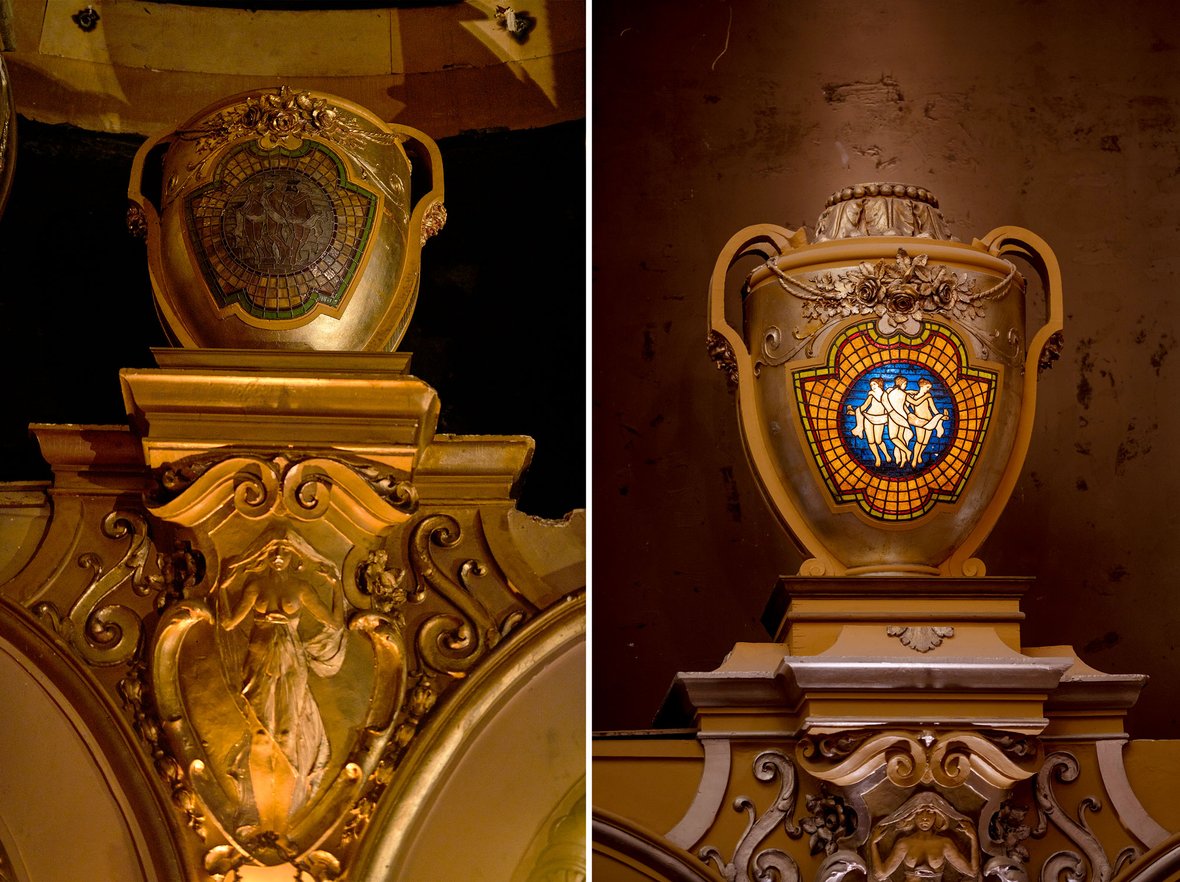 Before the renovation, the stage in the theater was only big enough for movie screens - not nearly enough room for a full orchestra. Moving the stage further towards the seats would have ruined the sightlines, to the extent that patrons in the balcony wouldn't have been able to see performers at the front of the stage. So the only choice was to increase the size of the building to accommodate a bigger stage. Altering the placement of an exterior wall presented an interesting challenge. 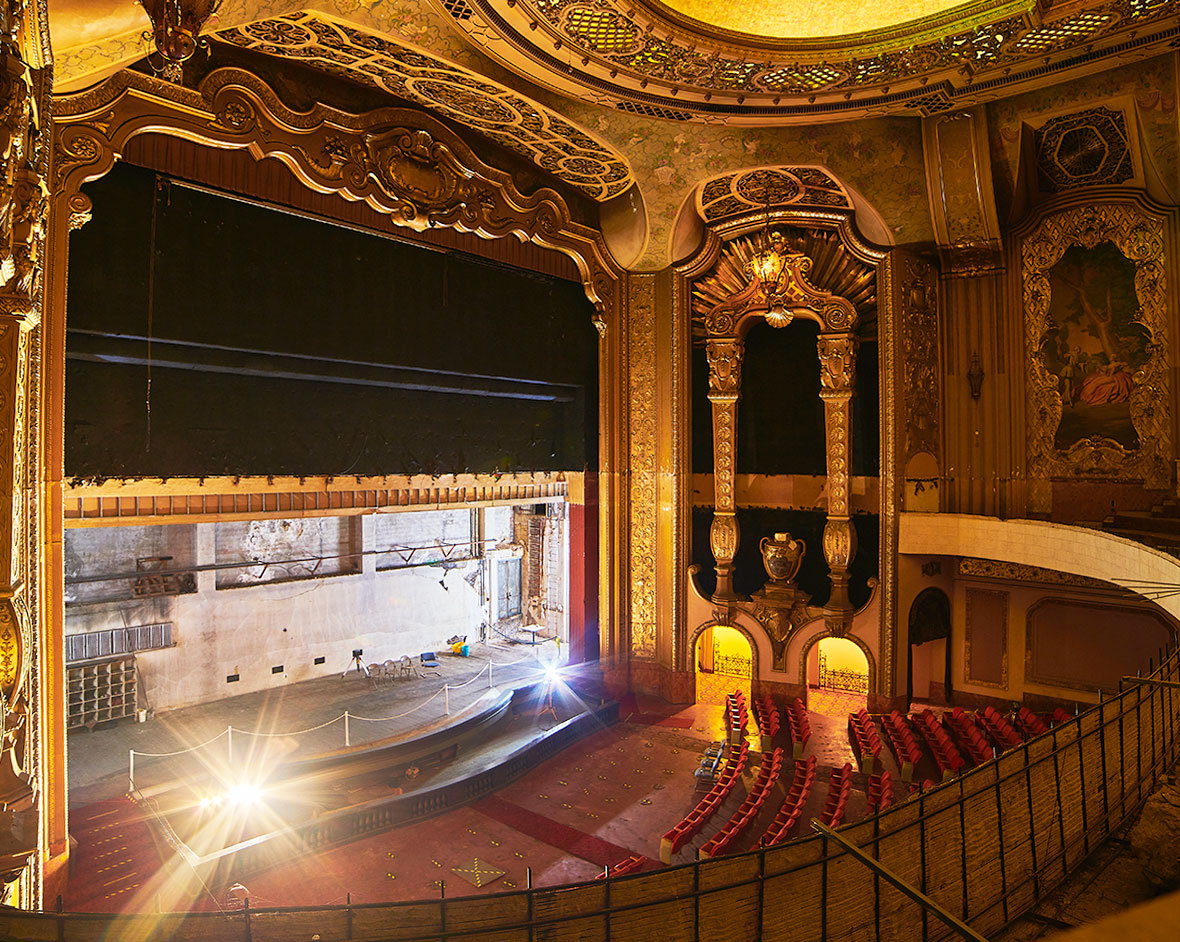 The Milwaukee Symphony Orchestra received about $19 million in historic tax credits to complete this project. They wouldn't have been able to move forward without support from the state and federal government, so it was imperative that the specifications and requirements for receiving historic tax credits be met. In most theaters, the backstage wall bumps up against an alleyway. But the Warner Grand's is on 2nd Street. And because it's on the street, that makes it a primary facade. The National Park Service oversees tax incentives for preserving historic properties, and they established that a primary facade could not be altered. So it had to be moved. 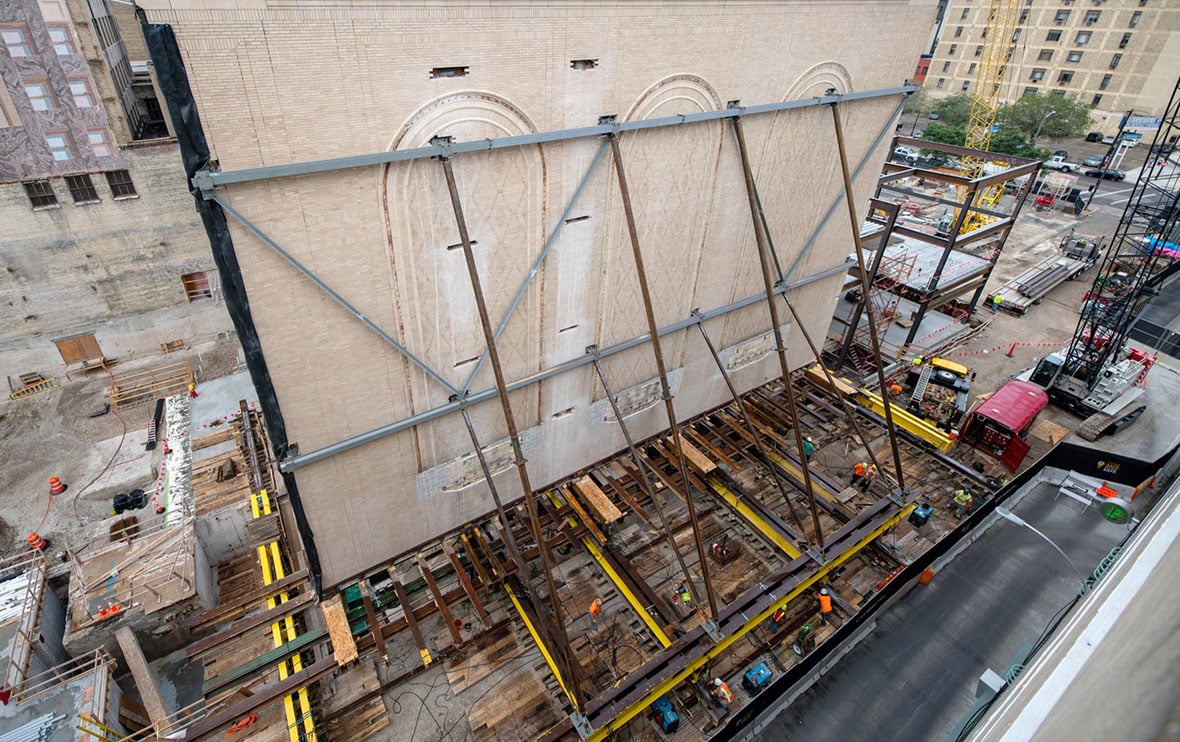 Weighing in at 1.25 million pounds, the 625-ton historic wall move was a challenge of massive proportions. C.D. Smith worked with the design team, wall move contractor and civil engineers to carefully devise a plan. Mark Niehaus, President & Executive Director of the orchestra, reminisced about the wall move on an April 13, 2021 WUWM 89.7 'Tuesday on Lake Effect' podcast. We transcribed some excerpts from their conversation. (Scroll down to continue reading below the photo.) 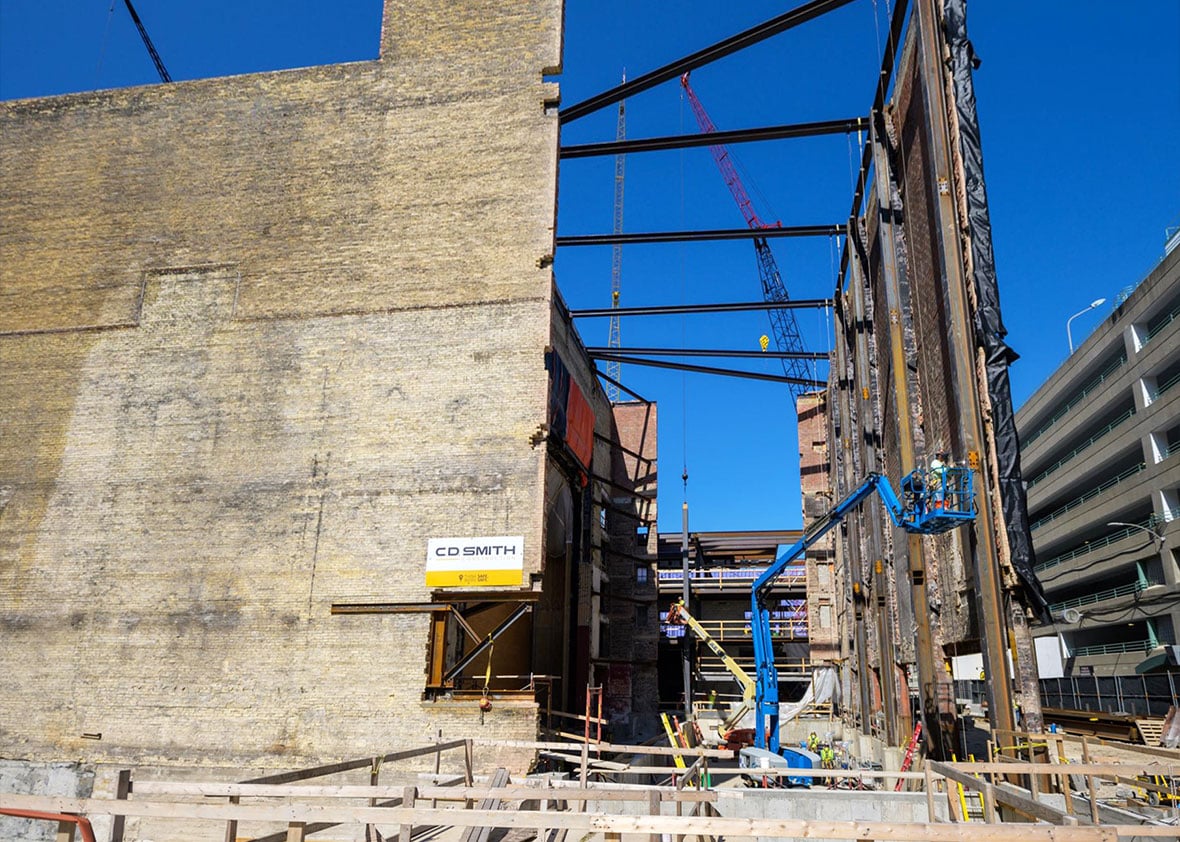 Mark Niehaus imagined the folks at the National Park Service thinking we would probably never be able to figure out the wall move. But when it was the only option left, we had to make it work. He went on to say, "We had a fantastic general contractor in C.D. Smith. It seemed risky, but the way it was done was so thoughtfully put together. And so much time was put into how it was done, the risk of the actual move was very low. And the whole thing happened - we had a week set aside for the move and we moved the entire wall in, I think it was six hours." - Mark Niehaus, President and Executive Director, Milwaukee Symphony Orchestra. 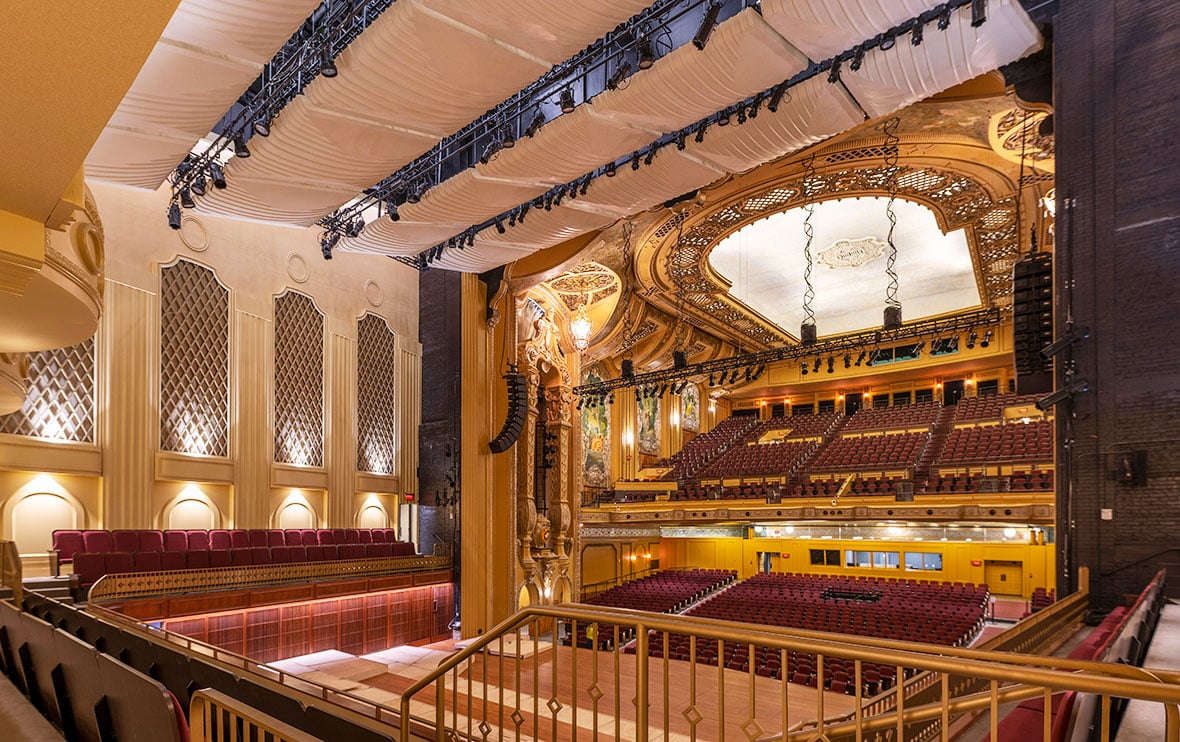 The Milwaukee Symphony Orchestra worked with one of the best acousticians in the country, Paul Scarborough, Principal at Akustiks. He was tasked with transforming the theater and stage into a world-class multi-use performance space and ensuring that the modern two-story addition met the acoustical requirements of what you would expect at the home of a professional symphony orchestra. We look forward to bringing you more details on the preservation and restoration of the Historic Grand Lobby and the atrium and pre-function spaces of the new addition in future Beneath the Hard Hat posts. Meanwhile, check out opportunities to visit and/or listen for yourself at mso.org/.

Watch a timelapse video and discover what went on behind the HISTORIC WALL MOVE from cdsmith.com/mso.

Click to learn more about the historic wall move from our MSO page.

Pictured Above: Exterior View of Results of Historic Wall Move to Expand the Stage for the Milwaukee Symphony Orchestra

Previous and Related Pages and Posts

About Us
C.D. Smith Construction is a nationally recognized industry leader in safely providing the highest quality commercial construction services. Utilizing an integrated approach and in-house technical expertise, our team serves as a solutions provider throughout all phases of a project, from planning through closeout. With veteran leadership and dedication to our employees and clients, we proudly place our name on projects of all sizes across the United States.
Safety

Through a proactive safety program, strict standards and our “Think Safe. Work Safe.” campaign, we have built a solid culture where safety is our number one priority day in and day out.

Go to our website's SAFETY page to learn more about how in everything we do, safety is our number one priority. A video is embedded at the bottom of the page.
SAFETY | IT'S WHO WE ARE
#ThinkSafeWorkSafe
Sustainability

Our commitment to holistically enhancing the current and future environmental, economic and societal well-being of the communities in which we live, work and play begins with education. We have a team devoted to understanding the difference between green building and a sustainable built environment. Our team will help you weigh the financial and business impacts of building green through a sustainable approach to make the most informed decisions. Join us in our commitment to better-performing buildings by increasing sustainable construction practices. It’s more than a trend… it’s the right thing to do!

Discover more about OUR SUSTAINABILITY by following the link.

Building community is the foundation of our organization. By supporting community initiatives, economic growth and development, we feel privileged to help ensure our team members have solid places to live, work, volunteer, serve and play.

Go to our Beneath the Hard Hat Press & Blog and select the C.D. Smith Gives Back filtered category to learn more.

Our self-perform capabilities are a direct result of our talented team members' skilled trade career paths in the communities in which we live and work.

Are you looking to build your career with an industry leader in construction? LEARN MORE about growth opportunities with C.D. Smith from the FIELD CAREERS page of our website.