Wayne Holum spent his career building people. Long after he retires, his legacy of leadership will live on through his team.

If you've had the pleasure of working with Wayne, you know he's the first one on a jobsite and the last one off. He is a superintendent that leads with respect, builds his employees up and earns admiration through trust. Over the last 16 years, Wayne has exemplified C.D. Smith's core values. He is a true leader who motivates others to develop leadership qualities and pushes his team to do better.

Jason Zwiefel joined C.D. Smith in 2015 working at the University of Wisconsin-La Crosse Student Union Center. Wayne recognized Jason's work ethic and presented Jason with a foreman opportunity for an upcoming project. While working at the Student Union Center, Jason began mentoring under Wayne. From there, Jason went with Wayne to the 3rd and Vine parking structure. "I remember being a bit nervous about my first Post Tension job," Jason shares. " But Wayne was encouraging and told me, 'I'm going to have your back no matter what.' And he did. He truly is the type of leader that will always have your back. When you make a decision, he will support your decision. If he disagrees with your choice, he will discuss the issues with you personally rather than in front of other team members."

"Wayne taught me a lot about being a good leader," Jason continues, "Anyone can build, but it takes a leader to know how to get the whole crew on the same page and work together to get the job done. Wayne recognizes every person's strengths and then builds on those strengths. It's with everyone's contributions that we can successfully complete a job." 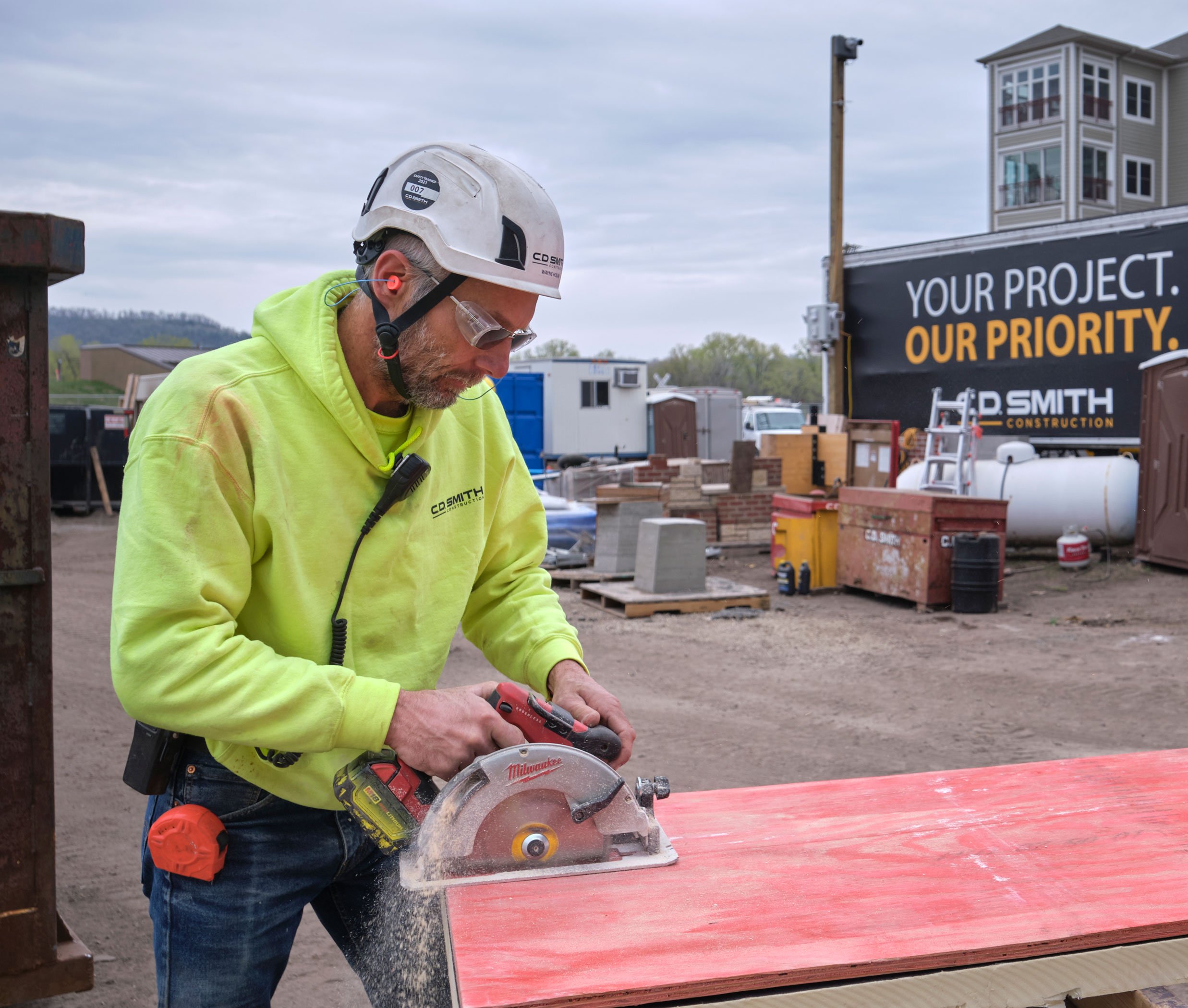 Andy Smedberg has known and worked with Wayne for nearly 14 years. Later on in his career, Andy worked under Wayne as an apprentice and foreman. "I admire Wayne's honesty," Andy shares. "Everyone respects him because of it. He also has an unmatched ability to remain levelheaded and professional, no matter what. He's the kind of leader who can get the world out of you because he's fair and empowers you to do your best."

"Wayne genuinely cares about his crew," Andy continues. "While working for him in 2015, I had a bad accident on the job. All superintendents worry about their guys, but Wayne went above and beyond. He stayed with me until my family could arrive at the hospital. The next day he fashioned a homemade get well sign, had all the guys on the job sign it and took a picture of the crew holding it. It meant a lot that he added a personal touch to show how much he cares."

Whether working in the field with crew members or connecting with project managers and owners, Wayne constantly builds relationships and gets the job done. "Wayne makes my job easy," Joe Van Handel, Senior Project Manager, cheerfully jokes around. "He is always planning ahead and looks at the whole picture. As a project manager, I know I can always rely on Wayne. He knows everything that happens on his jobsite. If there's an issue, he addresses it right away. He's in constant communication with the project owner, keeping everyone informed of what's going on. He knows the details and keeps things on track. I think we've worked on six projects that had budgets over $100 million, and every single one was on time and under budget!"

Wayne's leadership has inspired others, like Andy and Jason, to develop their leadership qualities. Even after Wayne's retirement, we look forward to his legacy of pushing teams throughout C.D. Smith to do better through positive encouragement. Wayne, we will miss your energy, enthusiasm, and most of all, your unfailing dedication to getting the job done. We wish you nothing but the best in your retirement.

Giving Back with Ben Roepke

Who We Are: Team Testimonials

About Us
C.D. Smith Construction is a nationally recognized industry leader in safely providing the highest quality commercial construction services. Utilizing an integrated approach and in-house technical expertise, our team serves as a solutions provider throughout all phases of a project, from planning through closeout. With veteran leadership and dedication to our employees and clients, we proudly place our name on projects of all sizes across the United States.
Safety

Through a proactive safety program, strict standards and our “Think Safe. Work Safe.” campaign, we have built a solid culture where safety is our number one priority day in and day out.

Go to our website's SAFETY page to learn more about how in everything we do, safety is our number one priority. A video is embedded at the bottom of the page.
SAFETY | IT'S WHO WE ARE
#ThinkSafeWorkSafe
Giving Back

Building community is the foundation of our organization. By supporting community initiatives, economic growth and development, we feel privileged to help ensure our team members have solid places to live, work, volunteer, serve and play.

Go to our Beneath the Hard Hat Press & Blog and select the C.D. Smith Gives Back filtered category to learn more.

Our commitment to holistically enhancing the current and future environmental, economic and societal well-being of the communities in which we live, work and play begins with education. We have a team devoted to understanding the difference between green building and a sustainable built environment. Our team will help you weigh the financial and business impacts of building green through a sustainable approach to make the most informed decisions. Join us in our commitment to better-performing buildings by increasing sustainable construction practices. It’s more than a trend… it’s the right thing to do!

Discover more about OUR SUSTAINABILITY by following the link.

Our self-perform capabilities are a direct result of our talented team members' skilled trade career paths in the communities in which we live and work.

Are you looking to build your career with an industry leader in construction? LEARN MORE about growth opportunities with C.D. Smith from the FIELD CAREERS page of our website.

YOUR PROJECT. OUR PRIORITY.® | We'd love to hear from you and look forward to learning more for discovering how to build community by connecting you with integrated commercial construction expertise.

C.D. Smith Construction is an industry leader in safely providing the highest quality commercial construction services. Utilizing an integrated approach and self-performing trade services combined with technical expertise, our team serves as a solutions provider throughout all phases of a project, from planning through construction. With veteran leadership and a dedication to our employees and clients, we proudly place our name on projects of all sizes across the United States.

Beneath the Hard Hat®, our company press and blog, offers an intimate look at the people and stories that make C.D. Smith Construction. With the latest industry news and project updates, we share insights on the superior spaces we are safely delivering year-round. Our team of technical experts provides useful tips and topics to help plan your next commercial project.

TRADE PARTNERS & BIDS |If you're interested in working with us or would like to request adding your company to our bidder’s database, please complete our Trade Partners & Bids Form: Click Here.

Ready to build community and get connected with commercial construction expertise? Use the below form to submit questions or request information. We look forward to learning more and discovering how we can make YOUR PROJECT. OUR PRIORITY.®.


We Build Careers. Grow With Us.

C.D. Smith offers a wide variety of growth opportunities in the construction trades. Start as a laborer and work your way into an apprenticeship program that best suits your interests and skills. Earn industry-leading wages and gain valuable trade skills through C.D. Smith Construction's apprenticeship career pathways. Learn more about field position wages, benefits, job training schedules, education hours, classroom requirements and the step-by-step stages of mapping out your apprenticeship program. Learn more by visiting our FIELD CAREERS page and exploring or inquiring about potential or current openings.